Prince Ndaba is an author from Johannesburg, South Africa. He was born in 1995 and raised in the suburbs of the post-apartheid regime, where he experienced life as a discriminated equal. Prince witnessed the subtleties of racism from a tender age and that helped him understand the dynamics of the society around him.

“Growing up in a Christian household, I was always led to believe in a calling from a higher power and a destiny that was set up for everyone.”

His first Novel and eBook titled: Plastic blankets and Angels was published in April 2020 during the outbreak of the Covid-19 pandemic in South Africa. The book is about a strange evil that arises in Johannesburg, Nico who’s a homeless man, realises that he possesses the very thing that can put an end to it. He is joined by a gifted young boy; an orphan with a mysterious background named Brandon, a cat with a secret named Enzo and an inquisitive girl named Adele. Together, they fight to free the city from the evil control.

“It took me a year and a half to write this epic story of homelessness, hunger, supernatural powers and talking animals. The story came from my homeless experience; which lasted 10 years. I was in the deep end when writing this story; between working a 9-5 and going through a 6 year relationship breakup, I managed to finish it in time and publish it months before my 25 th birthday.” “Have you ever talked to a street kid before? What did he say? I’ve noticed something about them, they will not give up on life, they will not commit suicide either because they understand that their lives are very special, they believe in purpose, and this fact, this reality is so beautiful to me.” ~Plastic Blankets and Angels

Prince is currently writing his second novel titled: The shape of things. Here, he paints a picture of a little boy who’s overcome by daydreams, and leaves you asking what it really takes to chase your dreams: Rudo is a 5 year old boy, who leaves his father’s house, in the suburbs of Johannesburg, in search of a mystical city; built without human hands. He believes that he has received brand new eyes; which can see through objects and people. In the mystical city, he hopes to find God himself and receive the gift of greatness, but on his voyage, he meets with many great perils that change him. “The story tackles psychological issues; touching on the way children see the world in a pure way, while alluding to the many spiritual influences that may arise in their innocent minds. I literally had to revisit my toddler days while writing this book, although it’s not my life story, it has elements of my personal experiences as a black boy living in South Africa. I’ve always had an acute interest in psychology, which helped me create a method that assisted in bringing out the (6 year old Prince) from deep within me.

I call this method, toddler-watching. It’s the simple process of gazing into your childhood picture, in the mornings and right before you sleep. The secret is in the eyes of your toddler self, in this case, I found that my 6 year old self, was very enlightened, inquisitive, emotional and burdened. I had to dig deep for all those things that had been repressed. You’ll notice that after doing this for a few days, you’ll begin to feel different; more childlike. If we can view ourselves objectively, inside and outside, we could understand ourselves better.

“To fully understand an object, you should view it both on the inside and on the outside; for that’s its true shape.” ~The shape of things

I managed to conjure up so many lost emotions that were deep inside. I even cried bitterly during one of the chapters; when Rudo’s father came home after being an absent father for most of the boy’s life. I remembered my deceased father and how he was when I was that age. I hadn’t even cried at his funeral, so writing this story has been therapeutic.

Writing this book has been a great pleasure for me, not only has it released a few buried emotions, but it has taught me something profound about children: they are the perfect example of what human beings should be like, and that brought me to a striking conclusion, in the words of Jesus Christ, “O father, Lord of heaven and earth, thank you for hiding these things from those who think themselves wise and clever, and for revealing them to the childlike…”

Children have the ability to daydream in colour, for me, this is parallel to a spiritual vision or dream, which shouldn’t be ignored or avoided by those around them. Only a child could see the world as a good place to live in, even in the midst of war, famine or a pandemic. 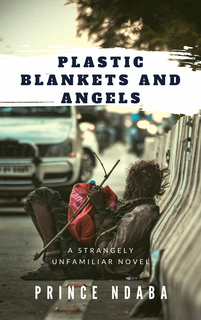 When a strange evil arises in the heart of Johannesburg, Nico, a homeless man, realises that he possesses the very thing that can put an end to it. Nico is joined by a gifted young boy, an orphan with a mysterious background named Brandon, a cat with a secret named Enzo and an inquisitive girl named Adele. The Shape of Things

Rudo, a 5 year old boy, seeks to find answers about his father’s life. He longs to see his mother again, but something more intimate keeps calling him further and further away. Will he find what his gentle heart seeks, or will destiny snatch his innocence before taking his life?